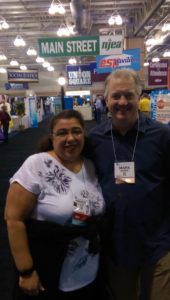 I had an entire set of slides ready to go for today. I was going to talk about things that I believe are important: school funding, teacher evaluation, testing, charter schools, unions, tenure, seniority, local control, identity, race, class, gender, sexual orientation…

I still think these things are important, maybe now more than ever. I still want to take a few minutes to talk about some of them.

But I would be seriously remiss if I stood before you here today – the first one of your colleagues to address you as the keynote speaker in a long, long time – and pretended that what happened on Tuesday isn’t the first and foremost topic we need to discuss.

Those of you who’ve heard me speak know I hate using prepared remarks. I’m a jazz musician, and I like to play off of lead sheets, not prepared scores. I like riffing on ideas and playing around with motifs. But I decided I needed to write this part of my speech out, because I want to be very clear in what I think needs to be said.

Let’s get the least important stuff out of the way first. Last year, the Supreme Court, in a 4-4 decision, decided not to hear an appeal of Friedrichs v CTA, the California court case that challenged the notion of compulsory dues for public employee unions.

The vote was only 4-4 because earlier in the year, Justice Antonin Scalia, one of the most conservative justices to sit on the court in the modern era, died suddenly, leaving the court deadlocked. Tied decisions uphold lower court rulings, so even if Friedrichs had gone to trial and the vote was 4-4, it would have upheld compulsory dues.

Friedrichs sought to overturn decades of precedent. Abood v. Detroit Board of Educationwas the decision that originally conceived of mandatory union dues. The concept is simple: if employees don’t have to pay dues, and a union bargains on their behalf, “free-riders” can enjoy all the benefits of higher wages and other gains due to collective bargaining without pitching in to cover the costs.

There is no question about what is going to happen over the next year or so regarding compulsory dues. The Republican Senate has held up the nomination of Merrick Garland, an extremely well-qualified and moderate candidate to replace Scalia, for an unprecedented months-long period. He will not be a Supreme Court justice – at least, not any time soon. Donald Trump will very quickly nominate a new candidate, and he will fly through the Senate nomination process. The Democrats will try to filibuster; they will not succeed, even if that means the Republicans throw out years of Senate rules and precedence.

Soon after this new justice is confirmed, a new court case will be filed along the lines of Friedrichs.  I’m not a lawyer so I’m not sure of the technicalities, but the people who bring the suit, backed by a group of extremely wealthy, anti-union backers, will find a way to push the suit through the lower courts and directly to the Supreme Court.

The ruling will abolish mandatory dues for public unions. This will happen well before the midterm elections.

This will be an existential threat for public employee unions; however, it will NOT be their certain death. Public employee unions – and especially teachers unions, who have historically been at the front lines of protecting worker rights, particularly those of women – must, however, change how they do business.

This union here, the New Jersey Education Association, will be one of the prime targets in the new anti-teachers union era. This union has stood strong for teachers and proudly used its political and other capital to advocate for the best interests of its members, which also – and don’t let anyone tell you otherwise – happens to be the best interests of this state’s students and their families.

I am constantly amazed and appalled when people try to make the argument that somehow teacher work conditions and student learning conditions aren’t the same thing. Middle-class wages with decent benefits are necessary if we are to draw talented young people into the profession.

Job protections, including tenure, are necessary to protect the interests of taxpayers and students, who count on teachers to serve as their advocates within the school system. Safe, clean, well-resourced schools make teaching an attractive profession, but they also lead to better learning outcomes for children.

It is not an exaggeration to say that right now, public education hangs in the balance. Teacher workplace rights are in serious jeopardy. The ability of NJEA to protect the future of New Jersey’s outstanding public education system – by any measure, one of the finest in the world, in spite of this state’s recent abdication of its role to fully fund its schools – is under dire threat.

There is only one course to take: we must organize. We must stand strong, we must stand together, and we must refuse to give into desperation. Our families, our colleagues, and our students have always counted on us when they needed us the most – we must not now, nor ever, stop fighting for them or yes, that’s right, for ourselves.

I want every local EA president to raise your hand. I want you to tell these people, who are the spine of this great organization: “I’ve got your back!”

By the way – and I say this knowing this is a room full of teachers — anyone who tells you this ugliness was happening equally on both sides is not accessing higher-order thinking skills.

No one should think for one second that our children have not been deeply, deeply affected by this outpouring of hatred. It is worst of all for any child who has been transformed into an “other” by the rhetoric that had infected this campaign.

I pray that I am wrong about Donald Trump. I pray he will grow into his position. I pray he will find some measure of conscience, some level of decency, within himself and rise to the enormous task ahead of him.

But even if he does, his campaign has emboldened dark forces within our democracy. We saw them in those ugly, violent rallies. We saw them when the so-called “alt-right” said and wrote unspeakably horrible words, spewed across our media and the Internet.

Those forces will have absolutely no qualms about taking out all their anger and all their hatred on our children. We, my fellow teachers, are an integral part of those children’s defense.

We can no longer tolerate racially biased classroom and disciplinary practices within our schools: the stakes have just become too high. We can no longer tolerate racist, sexist, homophobic, xenophobic language that, yes, sometimes, sadly, comes from our less-enlightened colleagues: the stakes are now too high. We cannot stand by and allow one kind of schooling to be foisted on one kind of student while another enjoys all the benefits of a truly meaningful education: the stakes are now too high.

The stakes are too damn high.

I’m not an economist, I’m not climate scientist, I’m not a civil rights lawyer, and I’m not a foreign policy expert. But I don’t have to be one to know that we may be in for very dark times. The economic plans that are likely to become our national policy have been widely derided by even the most conservative economists. Climate change is real and we may already be past the point where we can reverse the heating of our planet.

Our civil liberties have been under assault since 9-11; now, they are in even greater peril. And on Tuesday our world may well have become far more dangerous. If there is another leader of a democratic country who has said that he is fine with the use of nuclear weapons, I don’t know who he is.

I pray I am wrong, but when I rationally consider the future, everything tells me that our students may well soon be living in a world that is less prosperous, less healthy, less free, and less safe.

They will need us more than ever. They will be hungry and scared and stressed. They will be confused, because, even as we preach to them the importance of self-sacrifice and modesty, this country rewards too many who have lived lives of gluttony and arrogance.

There is no group better suited to the task of standing up for these beautiful, deserving children than you. You are New Jersey teachers. You are the smartest of the smart and the toughest of the tough. You grade 120 essays in a weekend. You make a close loss for a 1-and-15 team seem like the greatest victory in sports history. You wipe noses when others cower in fear. You make first graders beam with pride like Picasso himself when they see their art displayed on the walls of your school. You find the right words for a scared 12-year-old who can’t understand the world around her.

And, for the last seven years, you have continued to do your jobs – and do them well – even as you were denied the resources to do them, and as explicit promises made to you were broken. 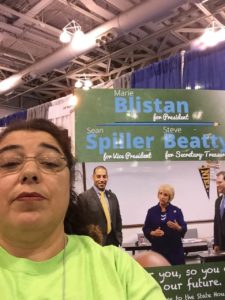 Fran Blabolil on the convention floor working at the Blisten/Spiller/Beatty booth!!